Hailed as a ceasefire by some governments and a five-day pause in hostilities by others on Thursday, the agreement comes nine days into a military campaign launched by Turkey against Kurdish-held territory on its southern border, east of the Euphrates river.

“Fear made us come here.”

After traveling for days to find safety, hundreds of Syrian refugees have arrived in northern Iraq. We are on the ground providing protection and urgent humanitarian assistance. pic.twitter.com/1SHbhRs3qn

“Despite the announcement of the ceasefire…shelling and intermittent clashes continue to be reported around Ras-al-Ain as of this morning, although the situation is reportedly calm elsewhere”, said Jens Laerke from the Office for the Coordination of Humanitarian Affairs (OCHA).

Updating journalists in Geneva, several UN agencies confirmed that they were continuing to deliver aid and provide basic services in the conflict zone “where access allows”.

Highlighting critical needs, the World Health Organization (WHO) appealed for the humanitarian response to be scaled-up urgently.

Spokesperson Tarik Jasarevic noted that 40 tonnes of medical supplies had been airlifted from Damascus to Qamishli earlier this week, while Ras al Ain and Tal Abyad hospitals remain closed.

This has made Tal Tamr Hospital “the main reception point for wounded persons coming from conflict at Ras al Ain”, he explained, adding that it has “struggled to cope with the influx of patients" and patients who have since been sent to Al Hasakeh and Qamishli.

The WHO supplies – which include more than 100,000 treatments and 620 trauma kits – will be distributed to facilities in Al-Hasakeh, rural Raqqa and rural Deir-ez-Zor.

Meanwhile, the World Food Programme (WFP) announced on Friday that it plans reach 580,000 people in affected areas this month. 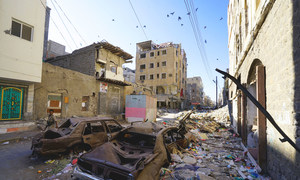 There are “small signs” of hope for Yemeni civilians caught up in fighting, following a reduction in violence, coupled with a 20 per cent increase in funding for the UN’s humanitarian response, the Security Council heard on Thursday.

The UN Special Envoy for Yemen, Martin Griffiths, together with relief chief Mark Lowcock, told members there was “cause for optimism” but still a long way to go, to decisively end more than four years of fighting between the Saudi-led coalition supporting the southern-based, internationally-recognized Government, and Houthi rebels who control the capital, Sana’a, and other key areas.

Airstrikes had “reduced considerably across Yemen”, he said, since the beginning of this month. “This is a very recent and inevitably fragile gain, but it’s a step in the right direction.”

Tuberculosis infections declining, but not fast enough among poor 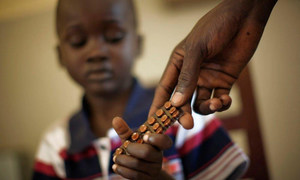 A staggering 1.5 million people died from tuberculosis (TB) last year, the UN health agency said on Thursday, in an appeal for far greater funding and political support to eradicate the curable and preventable disease.

According to the World Health Organization (WHO) and its latest Global TB Report, around 10 million people developed TB in 2018 and three million sufferers “are not getting the care they need.'' Countries where people suffer most are China, India, Indonesia, Nigeria, Pakistan, the Philippines, and South Africa.

Brazil, China, the Russian Federation and Zimbabwe - all of which have high TB burdens have achieved treatment coverage levels of more than 80 per cent, in 2018.

The UN Special Envoy for Yemen, Martin Griffiths, together with relief chief Mark Lowcock, told members there was “cause for optimism” but still a long way to go, to decisively end more than four years of fighting between the Saudi-led coalition supporting the southern-based, internationally-recognized Government, and Houthi rebels who control the capital, Sana’a, and other key areas.

Mr. Griffiths said the signs are “fragile, and in need of our diligent care and attention”. He highlighted the initiative from the Houthis, formally known as Ansar Allah, “to suspend all drones and ballistic missile attacks on Saudi Arabia, and the reduction of violence that followed the announcement.”

Airstrikes had “reduced considerably across Yemen”, he said, since the beginning of this month. “This is a very recent and inevitably fragile gain, but it’s a step in the right direction.”

He also noted the “tenuous calm” in the seat of Government in Aden, in the south, where fighting has calmed down between formerly allied Government forces and separatists. He called on a full agreement to be signed soon so law and order – and services – can be restored to the region.

Noting also the breakthrough in detainee releases and the renewed access to fuel ships entering the key port city of Hudaydah, he said they were “positive indications” adding: “By the time we meet again, I hope Mr. (Security Council) President, that we shall have more clarity, more certainty and more reason to hope.”

‘Deadliest month’ for civilians, but millions more in aid pledged

The UN Emergency Relief Coordinator and OCHA chief, Mark Lowcock, told members September had been “the deadliest month for civilians so far this year” with an average of 13 killed every day.

But when it comes to lifesaving aid, the Government has made “substantial progress” clearing backlogs in humanitarian delivery caused by the in-fighting across the south, he added, noting that funding gaps in recent months had forced “key programmes” to simply close.

In just the first nine months of 2019 overall, UNAMA counted more than 8,200 civilian casualties - 2,563 killed and 5,676 injured - similar to figures in the corresponding nine-month periods from 2014 onwards. But the last three months, has seen an “unprecedented number of civilian casualties”, UNAMA said.

United Nations figures released today show record-high levels of civilian casualties in #Afghanistan and indicate an urgent need for all parties to the conflict to do more to protect civilians from harm. Read more: https://t.co/hdWH6Qjl1k#HumanRights#ZeroCivilianCasualtiesNowpic.twitter.com/MzESO4f98x

In July, the Mission documented the country’s bloodiest month on record, with the highest number of civilian casualties in a single month since the UN began systematic documentation in the country, in 2009.

“Civilian casualties at record-high levels clearly show the need for all parties concerned to pay much more attention to protecting the civilian population, including through a review of conduct during combat operations,” said Tadamichi Yamamoto, the Secretary-General’s Special Representative for Afghanistan.

The harm done signals the importance of peace talks for a ceasefire, Mr. Yamamoto added, calling for a political settlement to the conflict. “There is no other way forward”, he said.

This year the country saw an overall decline in civilian casualties during the first six months, largely due to a decrease in the number of casualties caused by anti-Government militants, but brutal clashes reignited around the time civilians headed to the ballot box in late September, with election-related violence claiming at least 85 lives, and injuring hundreds more, UNAMA revealed  in special investigation published on Tuesday.

The Thursday quarterly report documented that from the New Year through 30 September, anti-Government elements were responsible for more than 5,000 civilian casualties, comprising 62 per cent of total civilian casualties for the time period.

As for technical causes, suicide and non-suicide improvised explosive devices (IEDs) claimed 42 per cent of all casualties, while ground engagements were the second leading cause of harm to civilians, at 29 per cent, followed by aerial attacks which caused the majority of civilian deaths, and made up 11 per cent of total casualties.

The UN agency said the reforms, which will enter into force by January, mark the end of an employee sponsorship system, common across the whole Middle East, known as kafala.

The Gulf State has also endorsed a new law establishing a non-discriminatory minimum wage: a first for the region.

“The ILO welcomes these reforms and recognizes the commitment of the State of Qatar to transforming its labour market. These steps will greatly support the rights of migrant workers, while contributing to a more efficient and productive economy,” ILO chief Guy Ryder said after the Council of Ministers unanimously endorsed the draft laws on Wednesday.

Under the new laws, workers will be able to change jobs following an initial probationary period. Previously, they required a no-objection certificate (NOC) from their employers.

The removal of exit permit requirements for all workers, except military personnel, means that they also will be free to leave Qatar, whether temporarily or permanently, without the permission of their employers.

The non-discriminatory minimum wage will apply to all nationalities and all sectors of the labour market. The level will be set later this year.

The ILO has been working with the Qatari authorities since November 2017 through a three-year technical cooperation programme. An ILO Project Office there, established in April 2018, has been supporting the labour reform agenda.

“Qatar is changing. The new tranche of laws will bring an end to kafala and put in place a modern industrial relations system,” said Sharan Burrow, General Secretary of the International Trade Union Confederation, which supports the partnership.

“We recognize that a new evidence-based minimum wage rate will ensure dignity for migrant workers. We urge the government to announce this as quickly as possible.”

That number includes 277 casualties, 28 of them fatalities, that occurred on polling day on 28 September, with children making up more than one-third of the victims.

“These attacks, along with public statements made by the Taliban, revealed a deliberate campaign intended to undermine the electoral process and deprive Afghan citizens of their right to participate in this important political process, freely and without fear”, said Tadamichi Yamamoto on Tuesday, the UN Special Representative for Afghanistan and head of UNAMA.

He commended the many Afghans who defied these threats to cast their votes. The report covers electoral proceedings from 8 June through 30 September, or two days after the vote.

More than 80 per cent, or 150 of the civilian casualties that occurred before polling day, resulted from two large-scale attacks in July and September.

UNAMA verified 100 separate incidents across Afghanistan on 28 September which resulted in the 277 casualties reported that day.

The majority, or 263, were attributed to the Taliban extremist group, which has opposed the internationally-recognized Government in Kabul since being driven from power in 2001.

The others were the result of crossfire incidents between the Taliban and the national security forces, while one incident was attributed to a pro-Government armed group.

Most Taliban attacks involved the use of rockets, grenades and mortars, as well as improvised explosive devices (IEDs) placed at or near polling centres, including schools.

He added that widespread or systematic attacks against civilians may constitute crimes against humanity, which the UN unequivocally condemns.