HONG KONG/BEIJING—High-resolution satellite images show that the construction of China’s first full-sized aircraft carrier is progressing steadily alongside expansive infrastructure work that analysts say suggests the ship will be the first of several large vessels produced at the site.

The images of the Jiangnan shipyard outside Shanghai were taken last month and provided to Reuters by the non-partisan Center for Strategic and International Studies (CSIS), building on satellite photos it obtained in April and September last year.

Noting a series of pre-fabricated sections, bulkheads and other components stacked nearby, CSIS analysts say the hull should be finished within 12 months, after which it is likely to be moved to a newly created harbor and wharf before being fitted out.

The vast harbor on the Yangtze River estuary, including a wharf nearly 1 kilometer long and large buildings for manufacturing ship components, is nearly complete. Much of the harbor area appeared to be abandoned farmland just a year ago, according to earlier images CSIS analyzed.

It dwarfs an existing harbor nearby, where destroyers and other warships are docked.

“We can see slow but steady progress on the hull, but I think the really surprising thing these images show is the extensive infrastructure buildup that has gone on simultaneously,” said CSIS analyst Matthew Funaiole.

“It is hard to imagine all this is being done for just one ship,” he added. “This looks more like a specialized space for carriers and or other larger vessels.”

Singapore-based military analyst Collin Koh said the modern, purpose-built facility on a sparsely populated island in the Yangtze may provide better security than the congested shipyards of Dalian in northern China. It could also help deepen co-operation between commercial and military shipbuilders.

The London-based International Institute for Strategic Studies noted this year that China’s military shipyards were focusing increasingly on larger surface warships, “adding to the sense that Chinese naval-capability development may be entering a new phase.

Give up and become Maoists.

That’s my counsel to Taiwan’s government and armed forces as they fret about the titan rousing itself across the Taiwan Strait. And an increasingly wrathful titan it is. In recent years, China’s People’s Liberation Army (PLA) has stepped up the pace of military maneuvers near the island even as Chinese Communist Party (CCP) grandees mutter balefully about how Beijing has never renounced the use of armed force to bring Taipei under mainland rule.

Not only has the leadership never renounced force, it also vows regularly that it will use force to settle the dispute on its terms if Taiwan doesn’t buckle. In fact, Beijing transcribed its threat into law via its Anti-Secession Law back in 2005.

Surrender or conquest: Like a certain mob boss of Hollywood lore, the CCP supremo has made the islanders an offer they can’t refuse.

Now, I am not counseling surrender when I urge Taipei to embrace Maoism. Just the opposite. Taiwanese need not and must not give up their independence or their liberal democratic way of life. Rather, they must adapt Mao Zedong’s war-making methods—techniques meant to empower the weak to prevail over the strong in a trial of arms. Once military commanders accept—and come to feel in their guts—that Taiwan is now the weaker contender in the Taiwan Strait, they will learn to think in Maoist terms. Strategy, operational concepts, and weaponry for turning the tables on the strong will come naturally to them.

The island’s political and military leadership must abandon the offensive mindset of the strong. That demands a cultural revolution of sorts. For decades, Taiwanese military folk cherished the conceit that they would best PLA hosts in a pitched battle and rule sea and sky afterward. The military regarded itself as a plucky, skilled, high-tech force. Aviators and mariners would venture forth in times of trouble and overcome the lumbering PLA, which was stronger by weight of numbers but remained backward in technological and human terms.

The Threat from Within 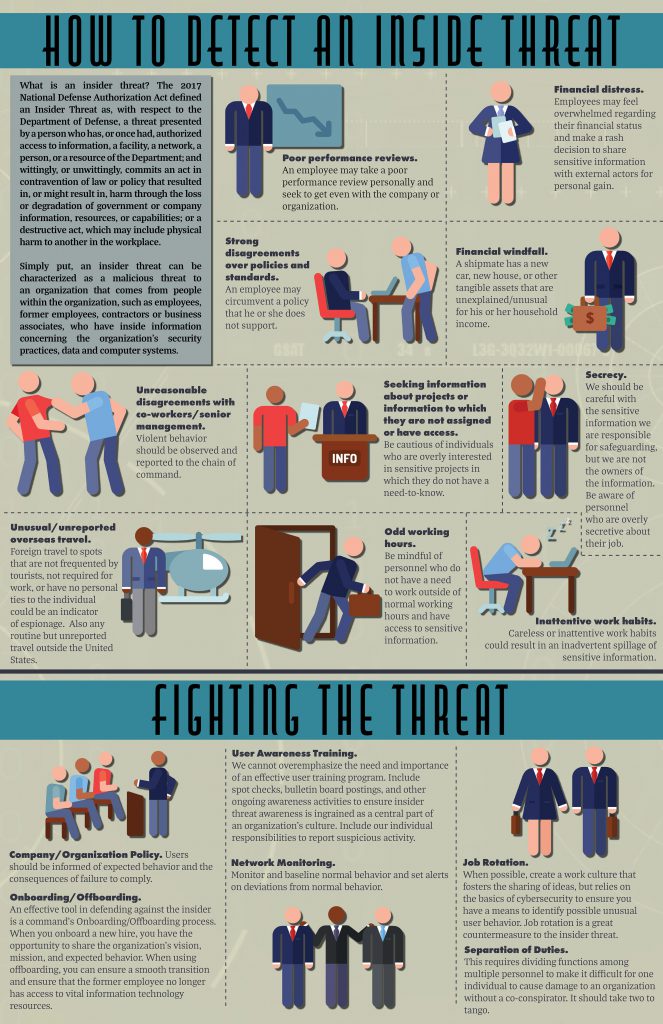 Whenwe consider cybersecurity threats and vulnerabilities, we often think ofexternal actors. Indeed, external actors work hard to get into our informationtechnology infrastructure. Surprisingly, they are not our primary threat. Whenexternal actors successfully exploit a vulnerability, you must consider how andwhy. More often than not, the exploit was because of failures from within.

Oneof the biggest threats to the security of our information systems and networksis the insider threat. Internal actors are responsible for 75% of securitybreach incidents. Do the math. Three-quarters of successful attacks on ourinformation systems come from within our infrastructure. The bad guys areworking hard to get in, but the internal actors already have the keys to thekingdom.

Whatis an insider threat? The 2017 National Defense Authorization Act defined an insiderthreat as, with respect to the Department of Defense, a threat presented by aperson who has, or once had, authorized access to information, a facility, anetwork, a person, or a resource of the Department; and wittingly, or unwittingly,commits an act in contravention of law or policy that resulted in, or mightresult in, harm through the loss or degradation of government or companyinformation, resources, or capabilities; or a destructive act, which mayinclude physical harm to another in the workplace.

Simplyput, an insider threat can be characterized as a malicious threat to anorganization that comes from people within the organization, such as employees,former employees, contractors or business associates, who have insideinformation concerning the organization’s security practices, data and computersystems.

We Asked an Expert to Imagine a U.S.-China War. We Wish We Hadn't. - The National Interest Online

Key point: Avoiding nuclear use could be tricky, but conventional weapons would still kill thousands.

How does the unthinkable happen? What series of events could lead to war in East Asia, and how would that war play out?

The United States and China are inextricably locked in the Pacific Rim’s system of international trade. Some argue that this makes war impossible, but then while some believed World War I inevitable, but others similarly thought it impossible.

In this article I concentrate less on the operational and tactical details of a US-China war, and more on the strategic objectives of the major combatants before, during, and after the conflict. A war between the United States and China would transform some aspects of the geopolitics of East Asia, but would also leave many crucial factors unchanged. Tragically, a conflict between China and the US might be remembered only as “The First Sino-American War.”

How the War Would Start

Fifteen years ago, the only answers to “How would a war between the People’s Republic of China and the United States start?” involved disputes over Taiwan or North Korea. A Taiwanese declaration of independence, a North Korean attack on South Korea, or some similar triggering event would force the PRC and the US reluctantly into war.

This has changed. The expansion of Chinese interests and capabilities means that we can envision several different scenarios in which direct military conflict between China and the United States might begin. These still include a Taiwan scenario and North Korea scenario, but now also involve disputes in the East and South China Seas, as well as potential conflict with India along the Tibetan border.

The underlying factors are the growth of Chinese power, Chinese dissatisfaction with the US-led regional security system, and US alliance commitments to a variety of regional states.