Hymer, the German firm that manufactures some of the biggest and bulkiest camper vans zig-zagging across Europe, surprised us by releasing an adventure-ready rig named VisionVenture that's based on the Mercedes-Benz Sprinter. It's just a concept, but it's cool enough to make even the most comfort-obsessed travelers stop browsing Booking to embrace the van life.

The unsuspecting Sprinter donated its chassis, its turbodiesel engine, its four-wheel drive system, and some of its body panels to the VisionVenture, but the rest is custom-made. Hymer teamed up with chemical company BASF to find creative solutions to the problems and inconveniences campers often encounter while on the road. Infrared-reflective paint keeps the interior temperature in check, for example, while Top Gear learned many of the add-ons (like the wheel arches) were 3D-printed.

On the ground level, the VisionVenture looks more like a luxurious apartment than a camper van; there's not a bed in sight. Hymer installed a full kitchen with numerous cupboards, racks you can attach potted plants to, and a lounge-like living room with an unobstructed view of the outside world. The two-person bed is cleverly integrated into a pneumatically-operated pop-top, which is like a more modern version of the tops Westfalia has historically fitted to Volkswagen vans.

Hymer hasn't announced plans to bring the VisionVenture to production, but it hinted the concept foretells what camper van shoppers might be able to buy in 2025. No potential pricing has been announced, but small homes on wheels often cost as much as a small home on concrete foundations.

Ford recalls more than half a million newer F-150, Explorers and other vehicles

Ford is recalling more than half a million new trucks and SUVs in North America for potential lack of seat restraint in event of a crash. The safety recall announced August 30 covers 483,325 models in the U.S., including America's bestselling vehicle in the Ford F-150.

A seat back with a faulty recliner mechanism "may not adequately restrain an occupant in a crash, increasing the risk of injury," according to the National Highway Traffic Safety Administration. Some of the affected vehicles could be missing a third pawl, which is required for seat back strength. Driver's and passenger's front seats, as well as rear outboard seats on the redesigned 2020 Ford Explorer and 2020 Lincoln Aviator, might have a loose seat back when equipped with a manual recliner mechanism.

Ford and Lincoln dealers will inspect the seats and replace them, as necessary, for free. The recall should begin October 7. Check your VIN at the NHTSA site linked above or visit owner.ford.com.

The 2020 Taycan may be the hottest new luxury electric vehicle, but Porsche has a long road ahead if it plans to dethrone the Tesla Model S in the eyes of the buying public.

According to a consumer survey conducted by Autolist, Tesla still has the advantage when it comes to EV ownership (or even potential EV ownership). Of the 1,500 Americans surveyed, 45% of respondents picked the Model S as their likely purchase versus just 33% who would pick the all-new Porsche Taycan.

Respondents were asked to list the top three reasons for their choice of either the Model S or Taycan. The top two reasons for picking the Tesla were brand reputation (41%) and Model S performance (34%). Efficiency, styling, trust in Tesla's ability to build EVs and the existence of the Supercharger network all tied for third place at 24 percent.

Porsche fans, on the other hand, were far more focused in their responses. Brand reputation (59%), performance (46%) and exterior styling (37%) were the top three reasons given for choosing the German performance brand's first electric vehicle.

While it may seem to have been lost in the noise, it's still clear that one key to Tesla's advantage is its exclusive Supercharger network. While Porsche's 800-volt charging system may seem like a trump card, America's current fast-charging infrastructure is neither capable of delivering enough power to supply it nor prolific enough to be accessible to potential owners. 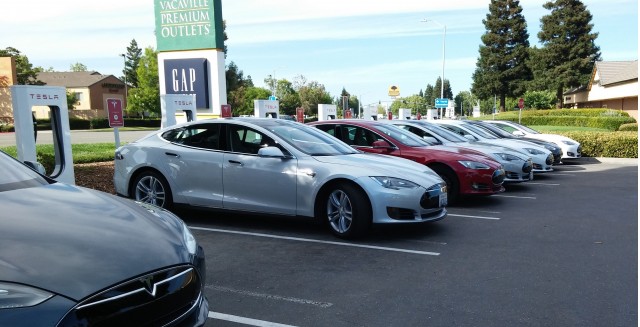 Porsche's "Turbo Charging" stations will be able to deliver the juice, but for the time being they will only be found at Porsche dealerships. In the wild, Taycan owners will have to settle for 400-volt solutions available at America's still-nascent fast-charging networks.

Nissan CEO Saikawa admits he was overpaid, in policy violation

TOKYO — Nissan Motor Co was embroiled in another scandal over executive pay on Thursday after Chief Executive Hiroto Saikawa admitted to being overpaid in violation of internal procedures under a scheme designed by ousted Chairman Carlos Ghosn.

An internal investigation found that Saikawa and other executives had received improper compensation, a source with knowledge of the matter told Reuters, raising doubts about Saikawa's pledge to improve governance in the wake of Ghosn's arrest last year for alleged financial misconduct.

Saikawa apologized and vowed to return any improperly paid money as he admitted to Japanese reporters earlier on Thursday that he had wrongly received stock-related compensation under "a scheme of the Ghosn era."

"I am deeply sorry for causing concern," Saikawa said, according to Jiji Press.

In other comments reported by Kyodo news, Saikawa denied any direct role in the execution of a stock appreciation rights (SAR) scheme and said he thought "proper procedures" had been taken.

The improper payments, including tens of millions of yen Saikawa received through the SAR scheme, were disclosed on Wednesday at a meeting of Nissan's audit committee, said the source who declined to be identified because the information is not public.

Disciplinary action regarding the issue would be discussed at an upcoming board meeting, the source added.

Nissan said in a statement that the findings from its probe including issues related to the share appreciation rights would be submitted to its board on Sept. 9.

The company has been trying to strengthen governance, slash costs and boost flagging profitability amid persistent allegations of financial misconduct stemming from Ghosn's 20-year reign at Japan's second-biggest automaker.

Ghosn is awaiting trial in Japan over charges including enriching himself at a cost of $5 million to Nissan. Kyodo reported that proceedings could start as early as March.

He denies any wrongdoing and says he is the victim of a boardroom coup.